“Our happiest moments as travellers always seem to come when we stumble upon one thing while in pursuit of something else.” — Lawrence Block

Copan Ruinas is not a large town so we only needed a few days before we explored every nook and cranny. So for the past few days, we have visited Macaw Mountain just 4km outside of town. Macaw Mountain is a nature reserve that works to promote breeding with endangered macaws, acts as a sanctuary to birds rescued from trafficking, and provides education for the protection of biodiversity throughout the region. We especially liked the fact that the $10 entry included a free guide and a three day pass so we could return to enjoy the natural space and take our time to really learn about the exotic wildlife. 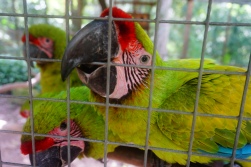 Our tour started in the Scarlet Macaw aviary. We are not the biggest fans of zoos as the idea of caging animals in small spaces for the entertainment of humans doesn’t sit well with us, but these aviaries at Macaw Mountain were enormous, allowing the birds a protected space to heal and breed. It was amazing to be able to walk right inside the lush aviaries and share the space they call home. Asher, you were fascinated with the large red birds and were intrigued with their emphatic call. We learned that macaws mate for life and it was beautiful to always see two macaws together in the breeding aviary; cuddling, flirting and cleaning each other’s feathers. Only a DNA test can determine the gender of the scarlet macaw as the male and female look identical, and we figured Darwin would explain this evolutionary fluke since macaws do not need to spend a lot of time attracting new mates, and so the males do not need to stand out. A chick takes 90 days to grow strong enough to fly from the nest and all of the successful offspring are released into the wild when ready. 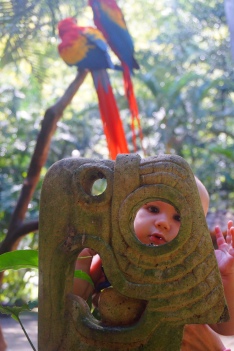 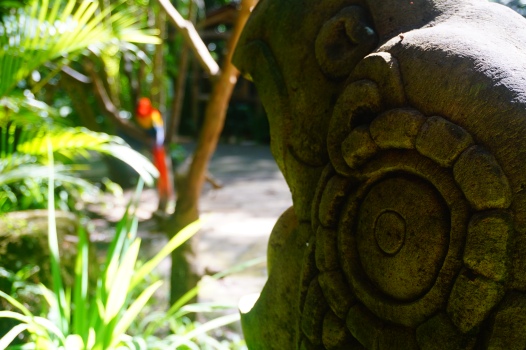 Birds were an integral part of the ancient Mayan daily life, religion and politics. The Mayan people lived in the area from 600 B.C. to 1500 A.D. and valued the long tail feathers of the Macaw and Quetzal (found in nearby Guatemala) and traded them as currency to be used in elite costumes. The Hieroglyphic Stairway at Copan Ruins marks one side of a great tomb for K’inich Yax K’uk Mo, the founder of the Copan Dynasty whose name translates to “Resplendent Sun Lord Quetzal Macaw,” who was buried with a massive carved stucco panel of intertwining macaws. While touring the facility and seeing the Scarlet Macaw, the Great Green Buffon Macaw, and the Blue Gold Macaw, we could not help but envision the impressive headdresses of the ancient rulers and how these birds helped humans reach godly status.

Asher, you loved strolling through the cool shade of the nine acre old growth forest which protected us from the 32C heat and full sun. A gentle stream meandered through mahogany, Spanish cedar and fig trees and was crossed by elevated wooden observation decks and bridges. Trying to capture a photo, we chased the elusive Blue Morpho butterfly through the trails, listening to the noisy calls of the wild Parakeets resting high in the canopy. We passed aviaries housing White Fronted Parrots, Red Lored Parrots, Yellow Crowned Amazons, Red Throated Parakeets, Keel Billed Toucans, Chestnut Mandibled Toucans, Grey Hawks and even the Great Horned Owl. It was sad to see the recently rescued macaws who were severely stressed and had lost most of their exotic plumage. Here they looked like plucked chickens slowly mending from a life of inappropriate captivity and trafficking. As we read the symptoms of a stressed macaw, we could not help but think about what the epidemic of chronic stress has done to us humans. With each bird, you watched in amazement and smiled reassuringly at mom when they startled you with their unpredictable flight or enchanting calls. 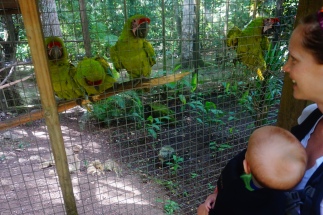 Just when we thought we had seen it all, the trail opened up to reveal macaws, parrots and toucans sitting wild on low branches and the guide carefully placed them on our shoulders and heads. Their impressive weight, strong beaks and gripping claws added to the awe, and we were able to capture this moment through our lens. Asher, on our second day, you were brave enough to keep your arm extended where a green parrot perched and you squealed with excitement. Words nor photos could truly capture the fiesta for the senses, and we were happy knowing our entry fee was supporting the great work at Macaw Mountain. 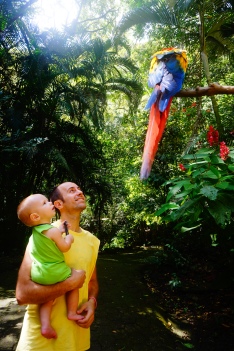 Difficult to find a tuc tuc so far out of town, your mom waved her arm to flag down the first pick-up we saw and each day, we climbed in the back for a scenic, breezy and bumpy ride back down the mountain. On day two, as we hopped out and attempted the futile effort of paying for fuel, the friendly family scribbled down their address and invited us to their Christmas Eve feast. Asher, some of our happiest moments as travelers seem to come when we happen upon one adventure in pursuit of another. Such is the beauty of Honduras. Such is the beauty of travel.