“The condition of freedom is risk.” ~ Goethe

Today we woke up not sure what to do. We wanted to head back to El Progreso to spend some more time with Andrea, our first Couchsurfing host in Honduras, but we had not had any luck contacting her over the past few days. We tried borrowing phones to call her and after what appeared to be a voice mail introduction in Spanish, we would proceed to leave a message. We later realized that the Spanish was saying the number is no longer in use and we were talking into dead air. Nervous to attempt a 4 hour bus day with you, we tried to locate another Couchsurfer in El Progreso and sure enough, we found one who was friends with Andrea. We contacted him through facebook and realized he was on holidays in New York but we tried to see if he had Andrea’s new phone number.

Friend – Let me try to communicate with her through facebook or whatsapp.

Us – (We might get somewhere. His English is alright.) Thank you, we will wait another 20 minutes then catch a bus.

Friend – Right now I wrote her and told me contact youngest.

Us – (Okay, so what is he trying to say here? We still don’t know if he made contact.) Did you reach her or did you just leave a message?

Friend – I wrote and I responded whatsapp.

Us – (No progress.) Did Andrea respond?

Friend – I mean they had a trip but something like that was going to look the way they serve them and was going to communicate with you.

With the clock ticking, we did not want to start a four hour bus day in the midday heat so we decided that we would take a bus to El Progreso and gauge your comfort. If you were finished, we would find a hotel but if you were up for it, we would continue to the lake. We hopped on the first bus we saw which was once a luxury coach, so the seats were a tad more comfortable but the Spanish dubbed Chinese Kung Foo movie was about 100 decibels too loud. This did not bother you and you spent the entire trip schmoozing with the passengers and playing with mom. Most people continue 30 minutes past El Progreso to San Pedro Sula to catch a connecting bus to Yojoa but we read the maps and found a much shorter route. We jumped off the bus in the core of El Progreso, walked four blocks with all our gear, tossed our packs in a cab, and barked out “la intersección de Lago de Yojoa por favor.” We pulled up to the bus just as it was leaving and applauded our savvy which saved us a solid hour of overland travel.

The bus ride through the interior was pleasant as we meandered through free range cattle farms and rural towns, and for the first time in travel history, our bus was thirty mintues ahead of schedule. We arrived in La Guama, a small town next to Lago de Yojoa, and asked a local to use his phone to call Robert, our next Couchsurfing host. We were a day early so were not sure if Robert was ready for us but he told us to hang tight as he was on his way to fetch us. He pulled up in a well-used all-wheel-drive vehicle and we could tell from the moment we met him that this was going to be an interesting experience to say the least.

Robert, originally from Missouri, is a born storyteller where after each of our questions, he began with “well there is a funny story about that…” and concluded only when every detail was accounted for. He pulled off the highway on what appeared to be an old logging road which quickly turned into the worst road we have ever seen. The 1km vertical mountain climb literally made our logging roads in Canada look like a freshly paved road. Robert got into the zone and violently white knuckled the wheel back and forth while maintaining enough speed to keep from stalling or rolling backwards. The road was a splatter of large boulders, giant craters, huge timbers and deep sloppy mud. The storytelling haulted but he did manage to say, “I think we will make it today” implying there was a possibility we would be trudging up those slopes with our gear. Luckily we rounded the final bend and slid to a hault next to his mountain abode. We emerged from the vehicle convinced that Robert is the best driver in the world.

After a brief tour of his place, we realized that we stumbled on one of the more picturesque places we have stayed in all our travels. Perched high on the side of a mountain, Robert’s home has a perfect view of the lake and is surrounded by lush unspoiled jungle. We were introduced to his petite Honduran wife Greysi, her aunt and sister, their eleven year old son Frankie, their six year old niece Cheyenn, six dogs, two cats and a bird. Greysi offered to clear a space in her home for us to sleep but we agreed that the rooftop terrace would suit us just fine. We climbed the ladder to a breezy covered rooftop, hung our mosquito net, laid out our jungle sleeping bags, and smiled at our new home. Robert said, “Asher is one lucky boy to have such wild adventures at such a young age. He will grow up knowing how to trust people and will have many stories because of it.” 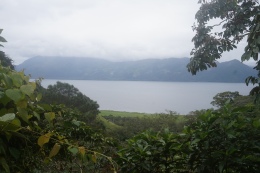 After settling in, Greysi served up a huge bowl of soup which had been stewing all day on a wood burning stove. The starchy yucca, potato, corn and squash filled us up nicely and the warm broth was welcome in the cool jungle air. We all retreated early for the night and as we laid in our open air room under our mosquito net, listening to the tranquility of a distant stream, we talked about the importance of taking smart risks because this opens the doors to experiences worth remembering, experiences worth retelling, and experiences that change you for the better, rewarding you with an entirely new sense of freedom. 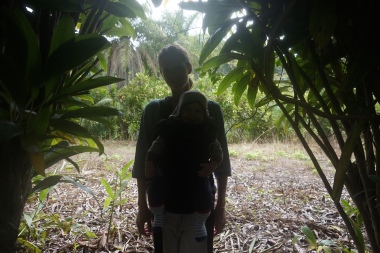 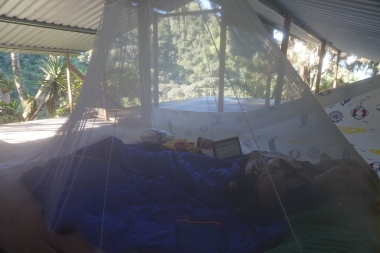 3 thoughts on “The Condition of Freedom is Risk”