Since Grumpy gave away his only light colored t-shirt to a mason in El Remate and the sun had no intentions of letting up, Grumpy wanted to pick up a new t-shirt to help combat the heat. On one of our trips to town, we stopped in at the Wal-Mart to pick up a few supplies and Grumpy picked out a t-shirt. We all questioned whether a white t-shirt was a good idea on a backpacking trip where we launder by hand, but he insisted on getting the shirt that would help him stay the coolest. With dry chickpeas to make hummus and a new shirt, we were ready to set off on our excursion to Isla de Mujeres the next morning.

Planning the excursion was disorganized to say the least. Since we are not staying at a resort and the shuttle driver would have a difficult time finding our apartment, we agreed to stand out front of the nearby OXXO (a convenience store identical to 7/11). As we approached the OXXO, we realized there was one on the main street nearby and we wondered if that was where we were supposed to be. We decided to split up and stay at each spot which turned out to be a good idea since in the end, we all managed to get on the shuttle bound for the ferry dock in Cancun.

As we drove, we talked about how exciting it was going to be to see the museum of underwater statues. Artist Jason deCaires Taylor has a deep concern for the health of our oceans and recognized humans work to preserve human masterpieces, but do little to protect the masterpiece that is nature. The international community is up in arms when ISIS destroys ancient artifacts and tombs, but no one bats an eye when it comes to the whole of humanity destroying our natural environment. So part of the idea for the underwater museums is to have pockets of the ocean which humans want to protect as well as provide a scaffold for which mollusks and algae can create a living art.

As we waited in line to finalize our trip and board the ferry, Grumpy helped himself to the free coffee cake and orange juice. Grumpy did not even have the chance to take one sip from his juice before a Gringo in a rush, plowed into Grumpy, sending the entire contents of his cup all over his new white shirt. We all had a good chuckle but the humor was short lived. When we were confirming our excursion, we learned that the underwater museum was not a part of it. Good old Alan lost a few more hours of sleep selling us this tour, knowing full well that our only goal was to see that museum. But we came a long way so we decided to make the most of whatever tour was available. We boarded the ferry and set off to a snorkeling point half way between Cancun and the island. 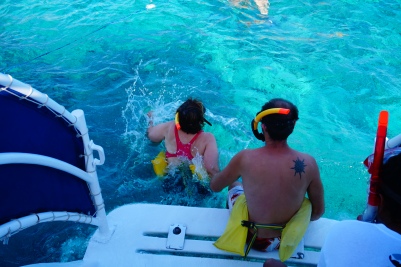 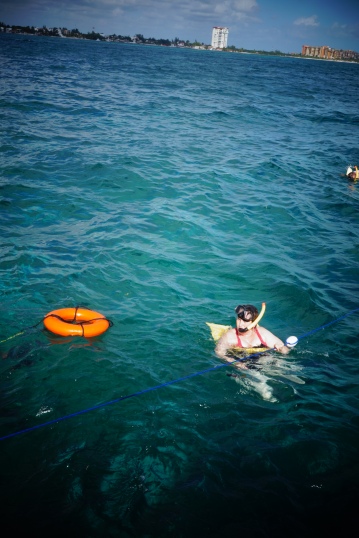 The winds were high and the ocean swelled but that didn’t stop Granny from gracefully slipping on her flippers and jumping in. Well, it wasn’t so graceful and it was less of a jump and more of a fall, but despite the angry sea, we were able to see schools of beautiful marine life. Asher, we wanted to put you in your floatie so you could tag along, but the ocean was just too violent for our liking. You stayed on board with Mom and Grumpy who were happy to take photos. After thirty minutes, the ferry continued its tour by driving to the Southern tip of the island which is covered with ancient Mayan statues of goddesses and represents how the Spanish gave the island it’s name – Island of the Women. When Mayan girls reached womanhood, they would travel to Isla de Mujeres and make offerings to Ix Chel, the goddess of the sun and fertility. 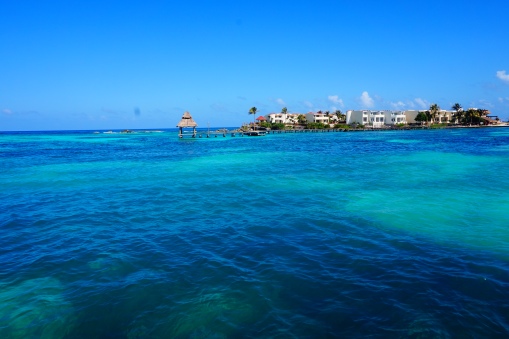 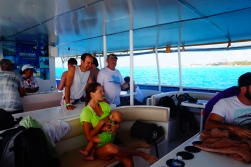 Being fed daily by several tours, dozens of fish and birds followed our boat, hungry for tortillas, and the tourists were ready with their cameras hungry for photos. How ironic it is to see that people have a natural curiosity and interest in nature, yet we live as though we can do no harm to it. Asher, you loved watching the birds fly within inches of your head and you kicked your legs with joy as you pointed to each and every one of them. 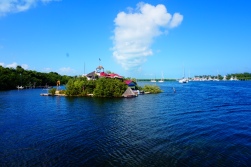 The tour continued North past the posh resorts and into a lagoon where private multi million dollar residences have made their claim. It was also very interesting to see that none of the cameras were out to take photos of the luxurious, but when we parked beside a rustic cabin built on a floating island of garbage, all of the cameras were snapping photos. Asher, your mother and I have toyed with the idea of raising you in a tiny home and upon doing research, we stumbled across a video of Richard Sowa, a British artist who wanted to clean up the garbage problem on the island, so decided to collect it all to make his own floating island. Were the tourists on our ferry inspired by the contrast of ultra rustic amid the ultra chic, by his attempt to solve a very real problem, or his confidence in living a life outside of the box? It was neat to happen upon Richard’s floating island by accident and there was something inspiring about seeing it parked beside a luxury yacht. 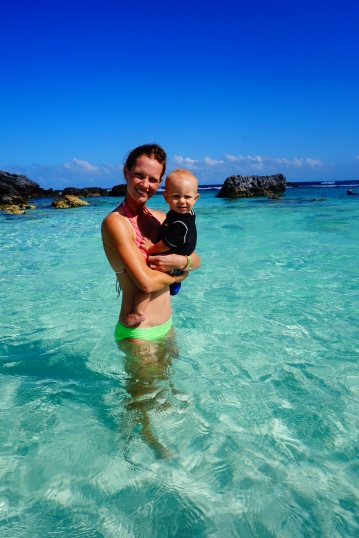 After a tasty all-you-can-eat lunch, a rarity for us at home or on the road, we continued our tour to a grouper breeding cove next to Playa Norte, what many consider the most beautiful beach in the Western Hemisphere. Since tours are not allowed to dock near Playa Norte, operators get around this problem by having tourists wade in the water to the breeding cove. The first 50 meters off the ferry were more than six feet deep so everyone had to swim a short distance before they could walk. This was a small hurdle since we also wanted to bring a camera, but I pushed you in your floatie and your mom whip-kicked her way to shore with all of our valuables above her head. The tour operators watched in amazement as your mom effortlessly glided through the ocean using only her legs since they are used to assisting mostly out of shape resorties laden with too much meat and alcohol. Grumpy is not a big fan of swimming and the only time we saw him wet growing up was when he had to put the pump into the lake each spring at the camp. But while we fed the hundreds of groupers in the bay with Granny, Grumpy built up the courage to dive in, then wade to shore. By the time his feet touched the white powdery sand, the tour operators were signaling our return to the ferry and poor Grumpy had to turn right back around and swim back to the boat. Asher, you enjoyed playing in the sand, swimming in the turquoise water and watching the fish as they swam around us and leaped into the air. 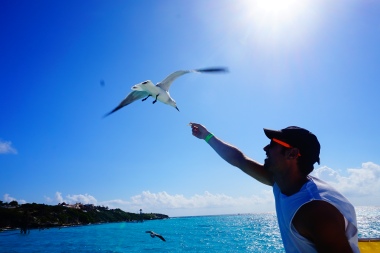 Aboard the ferry, we had a good laugh on Grumpy’s behalf since he jumped in fully clothed and now had no dry clothes for the remainder of the tour. But Grumpy really had the final laugh since the giant orange juice stain was washed clean in the salt water. The ferry stopped at a dock near the center of town and we were given an hour to explore the hundreds of shops, restaurants, food stands, and hotels that covered every inch of available space. We enjoyed strolling around and looking at all of the colorful crafts, buildings and people. 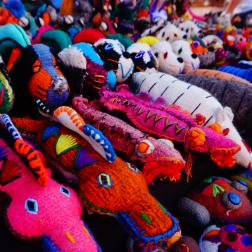 As the ferry pulled away from the island and the blue waters darkened slightly from the setting sun, we imagined how captivating this place would have been for the ancient Mayans and knew why they chose this sacred place to be the island of women. Though we did not get to see the underwater museum, our day did not lack in inspiration. From the beautiful landscapes, the kaleidoscope of blue waters, the swarms of hungry fish, and the garbage island home; Grumpy getting out of his comfort zone, Granny snorkeling with five foot barracudas and our family of three having another successful adventure, we learned that rather than waiting for the perfect moment, we should take the moments we have and make them perfect. 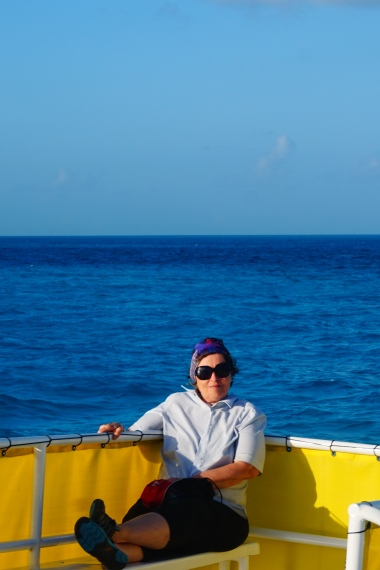 4 thoughts on “The Island of Women”