“The values to which people cling most stubbornly under inappropriate conditions are those values that were previously the source of their greatest triumphs.” ~ Jared Diamond

After laying low to allow your immune system some time to heal, we all developed a fever – cabin fever that is. So today we decided to head out early and visit the ancient Mayan ruin site of Copan, located just 3km from our hostel. Since we arrived at 8am, when the park opens, we were the first to enter the majestic site located in a fertile valley. Dozens of colorful macaws flew through the trees that lined the main path, calling out to the morning sun and setting the ambiance for the mystifying experience. Large agoutis roamed around unconcerned with our presence and you curiously observed all of the wildlife crossing your path. 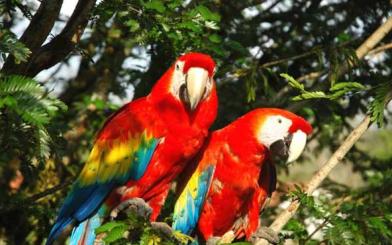 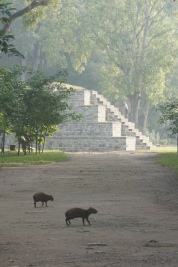 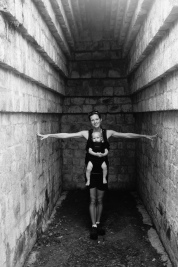 Though minuscule in comparison to Tikal, what Copan lacks in size, it makes up for in detail. It was a surreal experience to stand on top of a temple in the middle of the grand complex and look out across what was once the center of more than 20,000 inhabitants and for the time being, we were the only ones there. We made our way past the ball court to the staircase of the Acropolis and looked in awe at more than 2,000 hieroglyphs that were carved into limestone, making this the largest collection in the excavated Mayan world. Just then, a young man rolled up in his wheelchair and asked if we could take his photo. Despite being unable to walk from birth, this young man learned to speak English and traveled on his own by chicken bus from Nicaragua. Since he cannot afford hotels, he sleeps in police stations and whenever he encounters a barrier for his wheelchair, he simply asks for help. There was a doozy of a staircase to get to the residential area and East Court, but I helped him hobble up the stairs while Alyssa hauled up his wheelchair. What an inspiration to see this young man realize his dream to travel despite having limited funds and a disability not accommodated for in most of Latin America. 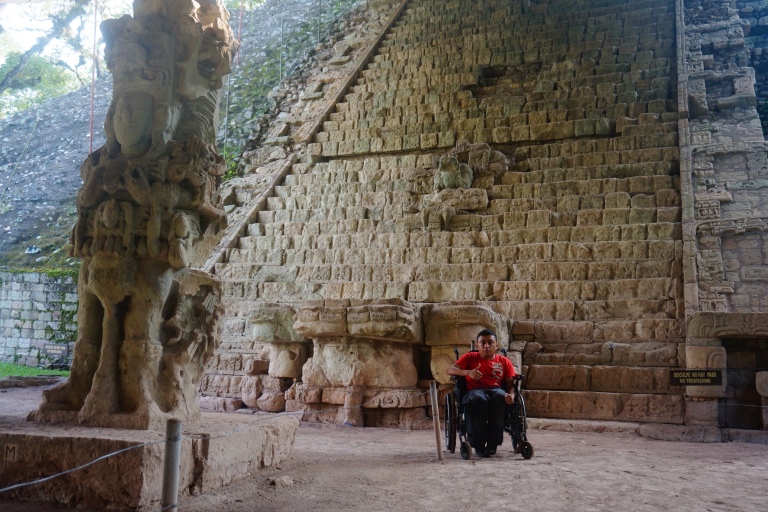 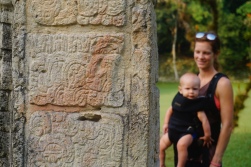 The inspiration continued as we marveled at grandiose structures, impressive stela and the intricate altars all made with an advanced understanding of mathematics and astronomy but with primitive tools nearly two thousand years ago. We wondered if in two thousand years from now, archaeologists will uncover masterpieces of human potential or mountains of diapers yet to decompose. Just like our previous visit to Tikal, it was difficult not to let our imaginations run wild and imagine what life would have been like in the year 426 when a Mayan prince from the north raided the established settlement and crowned himself king. Over 400 years, with sixteen different rulers, Mayans built what archaeologists describe as the most artistic site in Mesoamerica. We wondered what it would be like to sit on the stone bleachers that flanked the ball court and watch the ceremonial sport called ollamlitzli which used a heavy rubber ball and sometimes ended with a human sacrifice.

There are many steep “hills” of overgrown rubble begging for answers to the demise of this great civilization and yet we only need to look in the mirror to find them. War, diseases from animal husbandry, and environmental degradation are the three hypotheses put forward by Mayan historians and it seems like our great global civilization has not learned the lessons of history. Terrorism, zoonoses like Ebola and influenza, and the disappearing ice caps appear eerily similar to the symptoms that caused the fall of a civilization that lasted more than 2000 years. It appears as though it is time to reconsider the values that we so fervently cling to.

It did not take long to carefully view the entire site and after several hours, we decided to head back to beat the heat and the swarms of tourists. You fought your morning nap while at the ruins and we wondered if you could feel the energy of Copan or you were as curious as we to uncover the great mysteries of the past.