Now we are just feeling spoiled. With working at the camp and students on a daily basis, we are very used to going out of our way to help others but sometimes have difficulty being on the receiving end. Today was another Courchsurfing wonder. Andy and his cousin Nelsy picked us up at 10am to take us on a tour of some very remote sights around Tela. It was luxurious to ride in the comfort of his air-conditioned pickup truck with tinted windows and Nelsy happily played translator.

From the main road we headed back towards El Progresso, then made a right turn which took us down a long bumpy road lined with mostly natural vegetation. So far in Honduras it has been rare to see large plots of land left to nature as they have all been turned into a cash crop like palm oil, bananas or some other tropical fruit. Nelsy explained that the narrow swing bridge high in the trees was for monkeys to cross the road safely and that this whole area was now a protected site after a long battle between businessmen and environmentalists. The battle was not without bloodshed but the environmentalists wanted to preserve the very unique landscape and people who live there.

Playa Miama, is a long strip of powdery sand bordered by the ocean on one side and a large lake and river system on the other. The Garifuna people who are descendants of African slaves were originally brought to the Americas by Spanish Conquistadors and now call many communities along the Caribbean coast home. In Playa Miami, the Garifuna live in simple huts covered with palm leaves and are fishermen by trade. There is no electricity to the village and every hut has a clothes line blowing in the warm breeze. We wondered what the environmental footprint would be for these beach dwellers and were sickened by the irony that their remote beach was covered with trash washed up from the ocean of the affluent.

The bumpy road quickly turned into a dune buggies dream as we slid, stalled, climbed and crawled through ultra powdery sand. We stopped to take photos and it was amazing to just turn on the spot to take a calm lake view photo or a photo of breaking ocean surf. By this point, Alyssa’s biceps had become shocks for Asher so the bumps did not shake his delicate noggin and we were wondering just how much further off-road we would go. We approached another small red pickup truck that was completely stuck in the sand and Good Samaritan Andy offered to tow them out. We laughed as a heavy man bounced in the back of Andy’s truck to keep some weight on the back tires while five other men helped push the small red truck. Many graciases were exchanged and we assured Andy that we didn’t need to go further. Andy insisted his truck was okay but avoided the icing sugar sand by riding so close to the ocean that two tires were getting a permanent salt bath.

Not far ahead was a large split in the beach where the ocean and lake mixed in a swirling rush of water and fishermen waded neck deep to improve their odds of returning home with a meal. It was a beautiful sight so see the crashing waves subside into the calm lake and we were very grateful for this truly unique experience. This was so off-the-beaten-path that we would not have had this experience without Andy and his wild, albeit safe, driving. We snapped a few photos but the intense midday heat forced us back into the cool truck for another roller coaster of a ride back.

Andy did not stop at our hotel though. He continued in the other direction leaving Tela towards La Ceiba. On the right, he pointed out the green rolling hills where he trains for his marathons (that’s right, he exercises in this heat!) then made a left toward the secluded beach town of Triunfo. Triunfo is another Garifuna community but the beach front is reserved for ultra-posh resorts. Andy stopped to buy us some warm freshly baked coconut bread and sweet bread then continued on to a beautifully deserted beach. Tela and the surrounding area are hugely underrated and we were in awe of the beauty of this landscape. We were the only five on the beach which stretched for kilometers in either direction under the shadow of a tall and lush mountain. A few young local boys arrived and scaled up a large rock jutting from the shore and smiled when I showed them the photos of their mid-air acrobatics. Asher fell asleep on the car ride home and we all had a small siesta as we waited for the sun and temperatures to begin their descent. Though jumping in the ocean at these private locales was tempting, we didn’t want to mess up Andy’s truck so later that afternoon, we strolled back down to Tela beach and walked straight in to the water. By this point the water was warmer than the 28C air and Asher smiled and giggled as we took turns dunking our heads for under water peek-a-boo.

After a plate of steamed veggies, potato wedges with rice and beans, Alyssa put Asher to bed while I gave Andy another guitar lesson. We drew out the six chords that he learned, worked on changing chords at a tempo and figured out how to tune the guitar. All of this was done using basic Spanish, hand gestures and a whole lot of laughing. Today was a true example of how giving improves the well-being equally for the giver and the receiver and with hearts full of gratitude, we hit our pillows hard and instantly fell asleep. 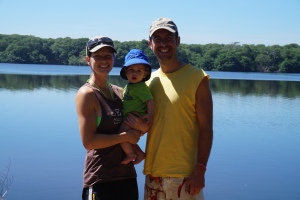 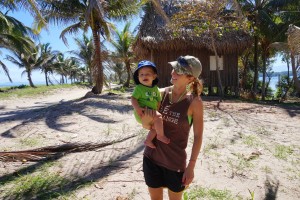 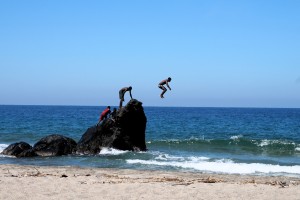 One thought on “Miami Beach, Triunfo and Homemade Bread”