Well, it is official. Asher is the best baby ever!

After a restless night, Alyssa and I woke up tired before our trip even started. This always happens to us the day before a big trip. Since Alyssa is a tad claustrophobic, I was up all night worrying that she would be okay on the flights and since I am worse than useless when overtired, Alyssa was up all night knowing I was up all night! If you have read our blogs before, you know that we love traveling but are terrible at the actual travel part.

Asher started out great with a poop in the toilet at the London Airport (if you don’t know by now, Asher rarely has a bowel movement in his diaper. About 90% of his bowel movements are in the toilet), then he was making friends with everyone on the plane. A nice man quickly offered to switch seats so Alyssa and I could sit together. The plane felt like a roller coaster ride for almost the entire 30 minute duration so I was ready to throw up by the time we landed. 1 short flight down. 2 more to go.

Asher was the star of the plane on the way to Houston. We would hold him up so his head would poke over the seat and he would give big toothless smiles to everyone on the plane. You could hear “ahhhhh” from thirty rows back. We fed him applesauce during the take off to help the pressure in his ears and after a quick feed he fell fast asleep. Alyssa looked at me and said, “imagine if he sleeps for an hour?” I replied, “imagine if he sleeps for two hours?” We both laughed knowing we probably wouldn’t be so lucky. Sure enough, Asher slept for almost 3 hours of a 3.5 hour flight!

We made the very wise decision to stay overnight in Houston, rather then taking a connecting flight straight to Honduras. By this time, I was totally out of commission. We strapped on our packs (120 lbs including Asher), called the shuttle and within minutes, we were flat out on the king size bed at the nearby Super 8 hotel. Alyssa scurried around the room, organized food for Asher and gave him his bath, and as I laid there feeling rather useless, I was also overwhelmed with gratitude for my amazing family. My adorable son didn’t make a single fuss or shed one tear the entire way and my beautiful wife did everything to take care of her men.

We both had another restless sleep so now we were going on two days with almost no sleep. We took the 7:30 shuttle to the very disorganized Houston airport. There were massive lineups everywhere but all we had to do was flash Asher’s amazing smile and he got us to the front of every line. Passing through Customs has become a breeze with the cutest baby ever. Asher quickly made friends with everyone around us on the plane and this is where we met Orlando. Orlando is from Honduras and fully bilingual. His English is perfect and he was a wealth of knowledge. We chatted the entire flight, he proudly showed us pictures of his family and some amazing sites for us to visit in Honduras. We exchanged contact information and he made sure that we were to call him if we ever needed anything at all. 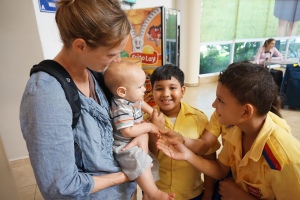 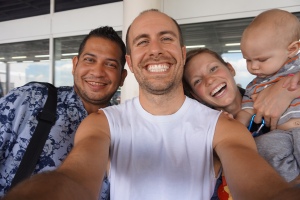 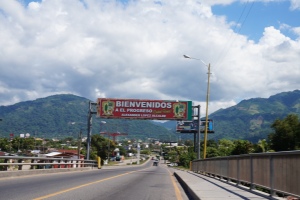 Asher got us to the front of the Customs line in Honduras and we thought it strange that we had to give our finger prints along with a mug shot. Even Asher had to be photographed. He was hungry and overtired at that point and I had to laugh when I looked over at Alyssa with her leg up on the Customs counter, toys dangling from a carabiner attached to her belt loop, with Asher nursing away. Asher’s mug shot was of him nursing!

The airport pickup lounge was blasting with happy Latin music and as we waited for our taxi, some English language learners approached us to practice their English. They were dressed up in their school uniforms and nabbed all of the friendly looking foreigners to test their skills. We were impressed with the level of fluency in these young kids. Of course they drooled over Asher and begged us for a photo of him. They were happy when we asked for a photo of them as well.

Andrea, our amazing Couchsurfing host in El Progreso sent a taxi to pick us up at the airport. Carlos, a linebacker of a man, could not speak a word of English but he found us no problem because we are the only Gringos traveling with an infant. One of our packs squeezed into his trunk next to the massive subwoofer and the others shared the back seat with Alyssa and Asher. The 38 degree 95% humidity hit Asher hard and he fell asleep right on Alyssa’s lap. Asher has never fallen asleep without some effort on our part, rocking, bouncing, walking, singing etc. It was a short ride to Andrea’s home and we were greeted by our well dressed and welcoming host. Andrea runs a private English school in the lower part of her home and volunteers for an organization called Students Helping Honduras which provides care for orphaned and abused children. After a few weeks, we hope to return here to offer a hand.

At 2pm her kids returned from school. Natalie, age 7, was happy to play with Asher and show him all of her dolls. Manuel, age 11, was my personal tour guide around town to help me exchange US currency for Limpira and buy some water and bananas for our bus ride to Tela the next day. I was very impressed with his fluency in English and even more impressed when he told me he is also fluent in Italian. He is very mature and happy to help out this Canadian with very limited Spanish. Juan-Carlos, Andrea’s partner, was also very helpful despite his limited English.

We cooled off with a refreshing bucket bath; ate a nice plate of rice, beans, tortilla and salad; downed a very sweet lemon tea; then retreated to our room exhausted and ready for another early night. We made it! 3 flights, 2 shuttles, 1 taxi and NO TEARS. Time to give my amazing wife a foot massage.